The history of Louis

The story of Louis is inextricably linked with the unparalleled success of the motorcycle in its evolution from means of transport to collector's item and pastime. 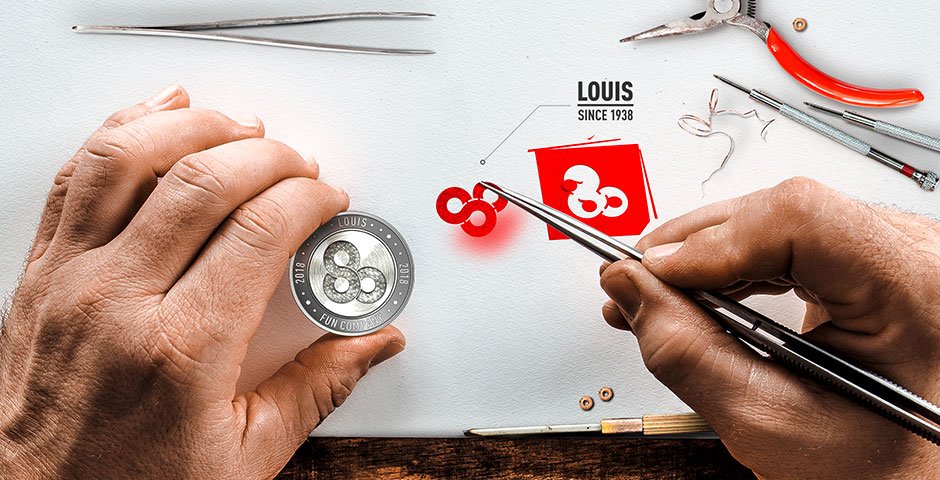 Detlev Louis took a small motorcycle repair workshop and over the decades shaped it into Europe's largest company for motorcycle clothing and accessories. At all times he held onto his firm belief in the major potential of the motorcycle – even when other paths perhaps appeared easier and much more profitable for others. This foresight, his wealth of ideas, but also his restrained and responsible approach and his German reliability are just a few of the pillars of his success.

A success story which is reflected in the unique structure and culture of his company.

1970 – The golden years for the motorcycle industry »

Movers and shakers, marques and motorsport

After the turmoil of the Great Depression, vehicle ownership advances slowly but inexorably in the Europe of the 30s: small motorcycles become affordable for the average consumer. Motorcycles and scooters experience their first boom. Motorcycle sport also begins to cast its spell on ever larger sections of the population.

During this period, motorcycle enthusiast Detlev Louis was growing up in Hamburg. At just 18 years old, he already owns a 500cc BMW R51, which he rides in his first competitive race. It is there where he meets Walter Lohmann, who opens a motorcycle shop in Hamburg in 1938.

After the war, they team up to run a motorcycle business at Rosenstrasse 10 under the name Lohmann & Louis and in 1946, Detlev Louis assumes sole ownership.

After the founding of the Federal Republic of Germany, the economic miracle brings growing prosperity to the masses. Many are finally able to fulfil their dream of owning a vehicle of their own, and the motorbike experiences a real boom. With his small company, Detlev Louis has really hit the bullseye: sales in new and used vehicles from Heinkel and Adler flourish, as does the import of BSA, AJS and Matchless motorcycles. 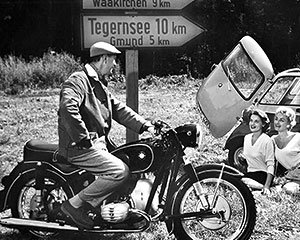 Motorcycle versus car: At the ends of the 50s compact cars became affordable vehicles for the masses. 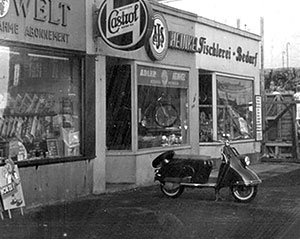 The Louis offices at Grindelallee 53, Hamburg in 1955. 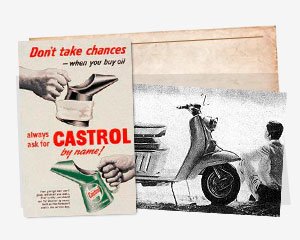 Advertisement from the 50s

1) Advertisement for Castrol oil. End of the 50s.
2) Bike boom thanks to the economic miracle: Heinkel 2-stroke scooter

Difficult times for the motorcycle industry

The motorcar replaces the motorcycle as the motor vehicle of the masses. Many bike manufacturers are forced to switch. Some still produce 50 ccm bikes or turn to completely different lines of business. Others close their doors permanently. With the right products, Detlev Louis successfully steers his company through the "lean" years. 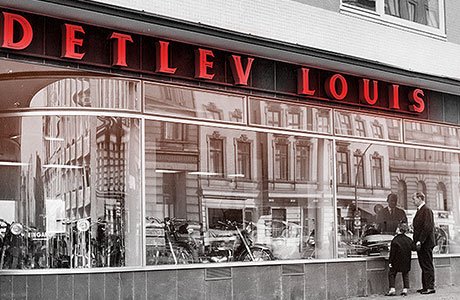 In the 1960s, and into the 1970s, all the Japanese motorcycle manufacturers are represented by German importers. 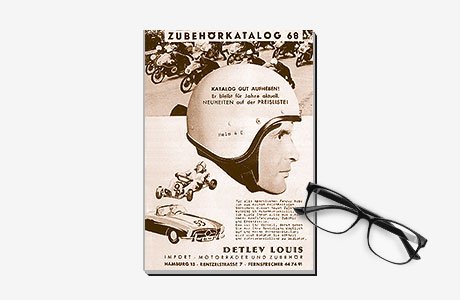 Detlev Louis is quick to respond to this sign of the times: in 1964, he publishes the first mail order catalogue and supplies an ever-expanding customer base by post.

By the end of the decade, it will already be clear that his optimism was justified: under the influence of rock 'n' roll, beat culture and the hippie movement, young people rediscover the motorbike. And the Japanese manufacturers supply the right machines: modern, fast and reliable.

The first Kawasakis are imported by Detlev Louis

Meanwhile, Louis begins to import Barbour and MKS clothing from England and in 1969 becomes the exclusive importer of Kawasaki motorcycles.

*The motorcycle is rediscovered by the youth of the 60s

Suddenly, motorbikes are no longer seen as just a means of transport, but rather the embodiment of freedom on two wheels.

The golden years for the motorcycle industry 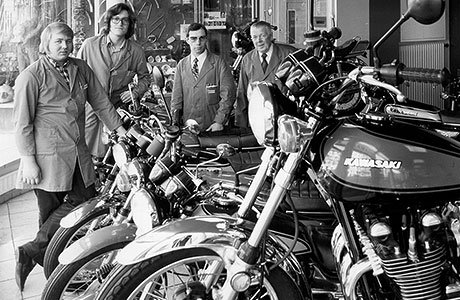 Rentzelstrasse 7 back in 1972, Germany’s biggest motorcycle dealership for a number of years

In 1970, the company employs 10 people, Guenther Albrecht joins the business and in 1977, he becomes an additional Managing Director. In the same year, the company moves into larger premises at Suederstrasse 129 in Hamburg. The vehicle workshop, sales department and the warehouse for replacement parts and the mail order business are all housed in the three-storey building. The company trades as a GmbH from this point on.

Louis now employees more than 1,800 people in Germany, Austria, Netherlands and Switzerland, more than 160 of whom are apprentices.

As the Kawasaki importer for Germany, Detlev Louis has the honour of presenting the 900 Z1 to the world for the first time at the 1972 IFMA motorcycle show in Cologne. 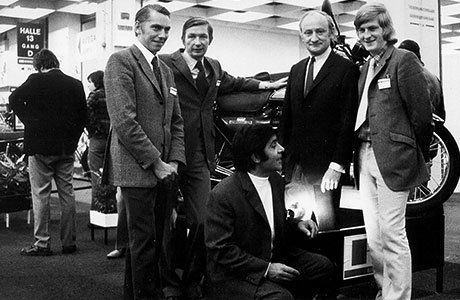 World premiere of the Kawasaki 900 Z1 at IFMA 1972. In the picture on the right: Detlev Louis and Guenther Albrecht

The new decade starts brightly and with great optimism. Growing incomes mean there is an increased demand in consumer goods; there is a trendy, relaxed spirit of the time which welcomes technical innovations of all kinds. A golden age begins for the motorcycle industry. The bike as a pastime becomes a major trend and the symbol of a lifestyle based on fun. 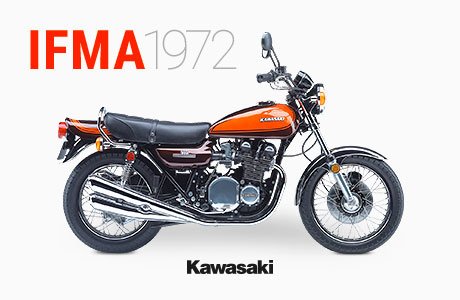 In 1972, Kawasaki was clearly leading the field. The 900 Z1 had become the brightest star in the motorcycle firmament. From 0 to 100 km/h in just 4,2 seconds – for a long time, the Z1-900 held the distinction of being “the world’s fastest production motorcycle”. 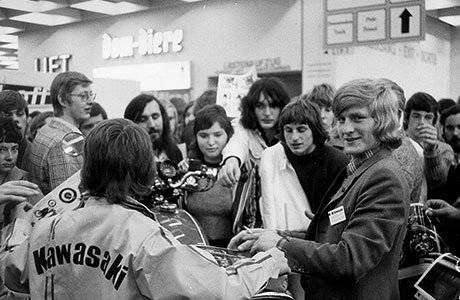 Huge run on the Louis stand at IFMA 1972

The four Japanese manufacturers Honda, Kawasaki, Yamaha and Suzuki conquer the markets and racetracks of the world. 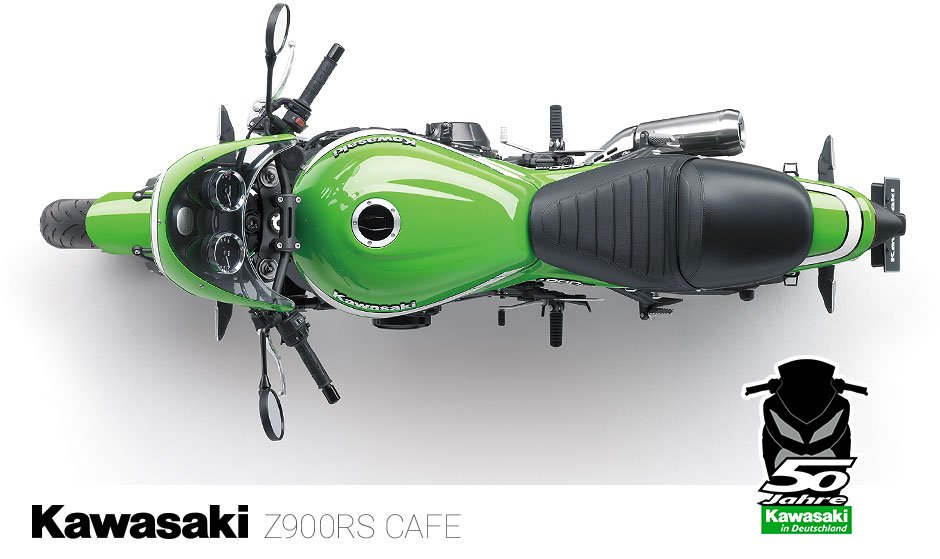 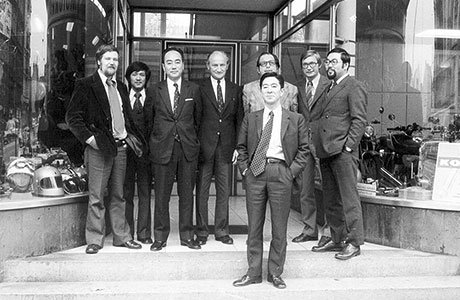 The three-man delegation from Kawasaki at Detlev Louis

In 1967, Kawasaki is looking for a sales partner for Germany and a three-man delegation visits one of Germany's biggest motorcycle dealers: Detlev Louis.

Import business with clothing and accessories

As motorcycle sales increase, the demand for clothing and accessories also grows. Detlev Louis also enters the import business in these sectors. 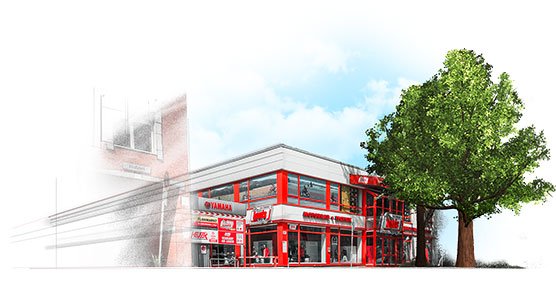 Since 1985, the store at Suederstrasse 83 in Hamburg has been the largest of all Louis branches

The sales catalogue has already grown to 357 pages. The mail order business and retail stores require increased logistics capacity. As a result, the Hamburg store is relocated to Suederstrasse 83 in 1985. The roomy, two-storey motorcycle shop with clothing, accessories and vehicle sales, and its floorspace of 2,400 m², is a sensation and becomes the Mecca for motorcycle specialists from across Europe. In the meantime a successful mass advertising campaign is launched, with supplements in specialist magazines. The mail order business grows, with more than 400 packages leaving the company's premises every day.

Every branch is an experience

Louis stores are divided into three different size categories: Louis GigaStores offer the largest possible selection of products housed in a motorcycle "world of experience", and boast up to 2,400 m² of floor space. Find out more »

The march of triumph of the motorcycle endures undiminished. The business with accessories and clothing at Louis grows to the same extent. In 1981, to guarantee proximity to the customer, Louis opens the first branch outside of Hamburg in Hanover. At the end of the decade, there are a total of 18 stores throughout Germany. 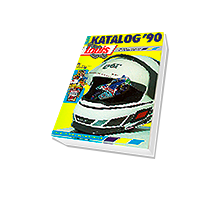 In 1990, Louis prints 120,000 copies of the mail order catalogue. A few years later, circulation breaks the million mark. The scale and content grow in parallel with the company's development.

In 1989, the increasing number of new branches and the ever-growing product range requires Louis to refocus. From 1991, Louis therefore begins relocation to a newly built, state-of-the-art administration and logistics centre in Hamburg-Allermoehe.

The company's largest construction project to date is a 10,000 m² high-bay warehouse for pallets (G6).

The acquisition of the adjacent office and warehouse complex (G7) is the latest expansion step. Louis now has more than 50,000 m² available for administration, logistics and the Allermoehe FUNSHOP.

Every day, several lorry loads of goods from all over the world are delivered to Louis premises, conveniently located a mere 20-minute drive from the port. Similarly, up to 450 Euro pallets of goods are sent out daily from the Louis central warehouse to the company's many stores, and up to 7,000 orders are shipped to Louis mail order customers. In order to manage such an enormous flow of goods, Louis has invested in a state-of-the-art materials handling system.

Having taken this crucial step, Louis is now in a position to ship every incoming order within 24 hours. From receipt of an order, the goods generally take just 2 working days to reach customers, including postal delivery time – often even arriving the next day! Overnight deliveries to Louis stores ensure the highest possible level of availability of goods on the shelves. Louis has maintained this exceptionally high standard for more than 20 years now – since mid-1992. 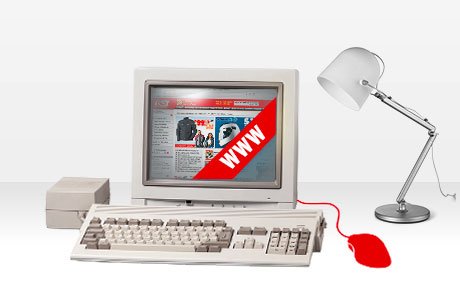 In 1997, the Louis Online Shop is launched and immediately becomes the most visited motorcycle website in Germany.

The company continues to expand on the reunited German motorcycle market. Both store and mail order business alike explode. The clothing and accessories business has long since surpassed sales of motorcycles. As a consequence, Louis ends all vehicle business in 1996. 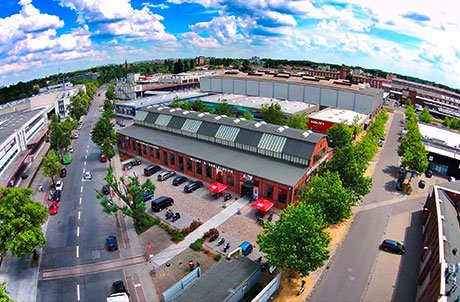 In 1998, the Louis GIGAStore in Berlin sets new standards

Much has changed for the retail network too. In 1998, the new Louis GIGAStore in Berlin sets new standards – a huge motorcycle "world of experience", with more than 1,700 m² of floor space, opens its doors to visitors. All over Germany, numerous Louis stores are redesigned and transformed into more spacious "MEGASHOPS" and "GIGAStores". By 1999, Louis is operating 47 shops.

The 21st century brings an end to the constant growth of the motorcycle industry. The internet bubble and the financial crisis leave their mark. Nevertheless, growth continues at Louis – in part because the company sets the course for the future in good time. 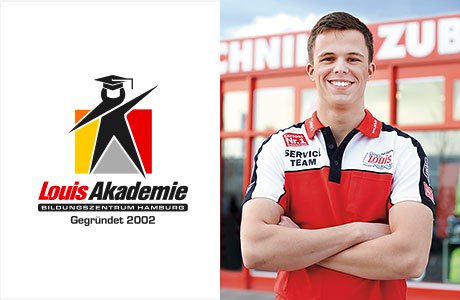 Expertise and qualification for customer service

The Louis Academy is founded in Hamburg in 2002; a unique educational institute for employee training of its time. It is where workers from all branches come together to exchange experiences, get to know new products and gain technical knowledge. But most of all they learn how to be consultants capable of impressing their customers with their expertise and passion.

Louis strengthens activities in other European countries. The most important tool in the process is the Online Shop. Clear and well-illustrated descriptions of the items – often with 3D animation – film-supported product presentation, up-to-the-minute offers, brand shops with the look and feel of the particular label and, of course, fast loading times, make each visit a great customer experience.

Since the summer of 2010, the entire Online Shop has also been available in English. But that was just the beginning ...

Technical data on more than 3,700 vehicles – free of charge!

Search for products from specific brands.

More than 50,000 documents available to be called up at the Online Shop.

Relaunch of the Louis Online Shop

After a general overhaul in 2014, the Online Shop now has new search and filter options, is faster and more clearly organised and, above all, it is also smartphone-friendly – so the sky's virtually the limit for our online shopping customers. 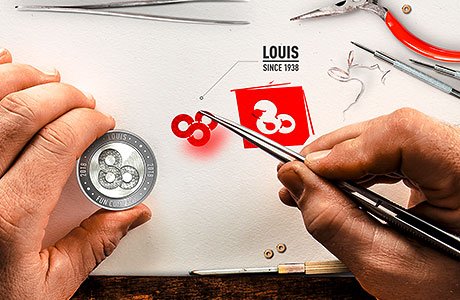 Our company has now been in existence for 80 years. Detlev Louis Motorrad-Vertriebsgesellschaft mbH has a long tradition. However, the development and growth of a small Hamburg motorcycle workshop into an international business and Europe's market leader required a lot more than just tradition, and it still does.

We pursue a policy of sustainable growth. A scrupulously intelligent range of goods with excellent value for money, a young and modern organisation, a high-performance logistics centre and well-trained, dedicated employees are the pillars of our success.

Management – From 1938 to the present day 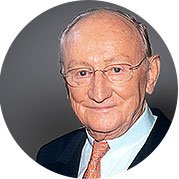 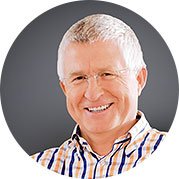 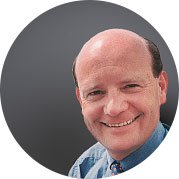 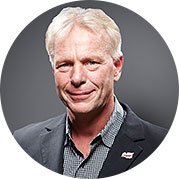 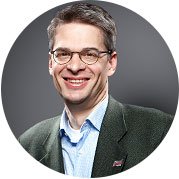 In order to secure the long-term future of the company, Ute Louis, widow of the company founder, decides to entrust Warren Buffett with his life's work. The highly regarded investor is known worldwide for his long-term thinking and approach. In 2015, Detlev Louis Motorrad-Vertriebsgesellschaft mbH is the subject of a takeover by Buffet's holding company Berkshire Hathaway. With both Managing Directors Nico Frey and Joachim Grube-Nagel, Louis remains an independent company even under this ownership.

1 All prices incl. statutory VAT (Germany),
but do not include €4.99 shipping costs for Germany.
Free delivery on orders over €199.00.

1 All prices incl. statutory VAT (Germany),
but do not include €4.99 shipping costs for Germany.
Free delivery on orders over €199.00.